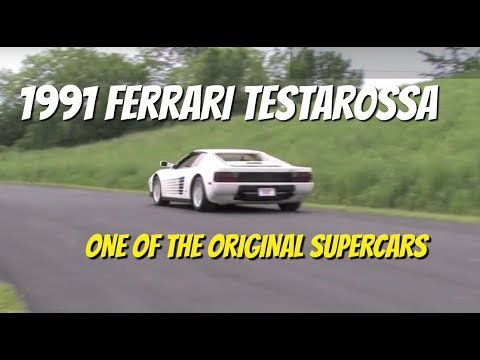 In 1982 Pininfarina was commissioned to style a 12-cylinder Ferrari with radiators in the flanks like a racing car, GT-level luggage and storage space, extreme comfort, and performance to top the road-car line of the world's premier sports car manufacturer. The Testarossa was to be shaped partly by the wind tunnel to ensure clean airflow, low noise and high speed stability. Rear location of the radiators made the car's aerodynamics even more important as passive direction of air to and from the engine bay had to be very effective. The result of Pininfarina's labors was easily the most recognizable and influential car of its time. The Testarossa is unmistakable at any distance, and impossible to ignore.


Based on the outgoing Berlinetta Boxer that had so admirably preceded it, the Testarossa was intended to be a faster, better handling, more spacious and more luxurious car than the BB, a machine that wasn't initially legal for sale in the US due to federal safety and emissions legislation. However, the Testarossa was designed from the outset as a world car - legal in every country.

Testarossa debuted at the Paris Auto Show in September 1984 as a replacement for the 512 BB. Ferrari's Testarossa was half of perhaps the greatest double act in supercar history. An era defining rivalry saw it pitched head-to-head with Lamborghini's awesome Countach and between them, they were the kings of the road.

Technically the Testarossa was almost identical to the 512 BBi it replaced, but on the outside the two were quite different. Functionality was the entire reason why the Testarossa looked so different. The single rear mounted radiator used in the two 'BB' models was replaced by one on either side of the engine. The engine alone was already quite substantial in width, but with a radiator on either side, the complete package needed a two meter wide rear body to house it properly.


This was not the first Testa Rossa in Ferrari's history. It was first used as 'TR' almost thirty years earlier for Ferrari's four and twelve cylinder engined sports-prototype racers. Italian for 'red head', Testarossa referred to the bright red cylinder heads used on the engines. The most famous of these was the multiple 24 Hours of LeMans winning 250 TR.

Motor racing had proven in the preceding decade that mounting the engine behind the driver was an improvement over mounting it in front.

The engine was a modified version of the 512 BB. It had four-valves per cylinder, Marelli electronic ignition, Bosch K-Jetronic fuel injection, and capable of producing 390 bhp from the 4943 cc horizontally opposed 12 cylinder. The zero-to-sixty time was about 5.3 seconds and top speed was above 180 mph.


Ferrari's five-lite Flat-12 was ultimately derived from the 1975 312 T Grand Prix contender, these cars going on to win both F1 Drivers and Constructors Championships. The Testarossa's look, performance and reputation made it perhaps the ultimate eighties status symbol, a reputation it could well do without today. Using a welded tubular steel frame, the chassis wasn't too dissimilar from the outgoing BB, just a few dimensional tweaks being made here and there. The wheelbase was stretched from 2500 to 2550mm, the track widened and a removable engine subframe used that could be un-bolted from the main chassis in order to allow easier access to the engine. Displacement of the 180° Flat-12 motor was 4942cc, this thanks to a bore and stroke of 82 x 78mm respectively. Output was 390bhp at 5300rpm, compression being set at 9.2:1. An important revision came in the form of Ferrari's four-valve cylinder heads (known as Quattrovalvole), all the various Berlinetta Boxer's having only ever featured two-valve heads.


This Testarossa was built for the US market and made its way into those showrooms during 1985. The vehicle was designed to comply with the US emissions, regulations, and safety restrictions.