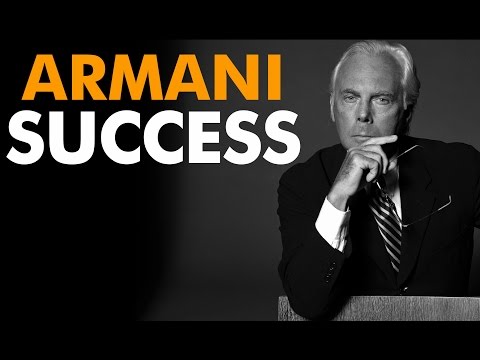 Like this video? Please give it a thumbs up

My name is Evan Carmichael and I believe that the fastest and most effective way to build a business is to model the strategies of people who have already done what you're trying to do. I call it Modeling the Masters. My last post with almost 8,000 views was 3 Success Lessons from the Twitter Founders.

Today we're going to take a closer look at how a young man from a war-torn country grew from poverty to becoming one of the top fashion designers in the world. This is the story of preeminent fashion designer Giorgio Armani and the top 3 lessons that you can learn from his success.

"Remain true to yourself and your philosophy. Changing in the face of adversity will in fact diminish your credibility with your customers." - Giorgio Armani

Giorgio Armani (born July 11, 1934) grew up in the small northern Italian town of Piacenza. Armani grew up in a family of five that was hard working, but never had too much money to go around. His childhood was not an easy one. The realities of the Second World War in which Italy was caught at the time, were all too apparent to the young Armani. After losing two young friends to a war bomb, Armani and his sister also became the target of machine gun fire from an overhead plane. However, Armani and his family survived the War and relocated to Milan. It was a city decidedly marked by class division, and one in which Armani's parents struggled to rebuild their lives. They found it hard to find their footing in this much bigger and tougher city than their little town of Piacenza.

And so, he enrolled in the medical school at the University of Bologna, where he studied for two years to become a doctor. However, when he discovered that the sight of blood made him weak, Armani knew that line of work was not for him. In 1953, Armani was called to fulfill his military obligations, which he accepted eagerly as a chance to clear his head and gain new direction in his life. For all of his experience, Armani was assigned to the infirmary. However, he quickly grew bored with his prospects and realized that war life was not the romantic notion he had seen in the movies.

He took a short break from the service and took a trip to Milan that would forever change his life. That was where he met a friend of his who happened to work at La Rinascente, Milan's largest department store, and who would give him his first break into the fashion industry. After the meeting, Armani said he had become a believer in destiny. That destiny has made him known for his classically tailored, sleek power suits and clean, high quality fabrics that everyone from the who's who of Hollywood to the bankers on Wall Street have fallen in love with. Now, Giorgio Armani S.p.A. has over $1.5 billion in revenue and a retail empire that extends to more than 35 countries.

Action Item #1: Stick to Your Vision

Armani has designed clothing for some of the most influential people on the planet, but, according to Armani himself, some of his proudest designs were for Princess Charlene of Monaco. He has been clothing her since she first wore one of his pieces in 2008 at the Olympic Games in Beijing. He spoke to Vogue magazine about designing her wedding gown and believes Princess Charlene "knows how to wear my creations with nonchalance and confidence of youth."

Getting to the point where royalty requests a specific designers clothing is considered the pinnacle of a designer's career, but Armani continues to challenge the market and re-invent his designs, which was shown in his design for Princess Charlene's wedding dress. According to Armani, "I felt the new design was appropriate given that there would inevitably be comparisons with Princess Grace, and though such comparisons are of course a sign of admiration, each person has their own individual and unique style, and style is an expression of the times." He goes on to say it was one of greatest creations.

"In this business you can't have a destination, an arrival point. Otherwise your competitors will overtake you, or you become complacent."

"The long and short of it for me is that the entrepreneur is the one who at the end decides yes or no and I like that even though it's a lot of responsibility."

"I supposed it would have been great to invent something as classic and enduring as the tuxedo. But if I was collecting royalties, I wish I'd invented the corkscrew."

What Do You Think?

Do you keep your vision sharpened? Do you continually stretch your brand and expand your reach? Are you following your conscience? Tell me what you think by leaving a message below.