How Pope Francis Is Changing Catholicism 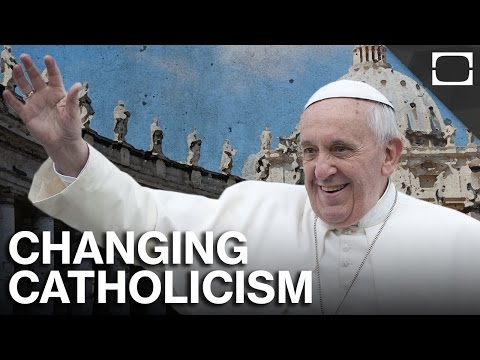 For decades, the Vatican adhered to a strict doctrine, but now Pope

Francis is drifting away from it. So how is Pope Francis changing the church?

Learn More:
The pope warns churches to take in refugees-or else
http://qz.com/503227/the-pope-warns-c...
"Pope Francis has issued a stark warning to Roman Catholic religious orders: help alleviate the escalating refugee crisis in Europe by hosting asylum seekers, or pay taxes, like everyone else."

Pope Says Church Is 'Obsessed' With Gays, Abortion and Birth Control
http://www.nytimes.com/2013/09/20/wor...
"Six months into his papacy, Pope Francis sent shock waves through the Roman Catholic church on Thursday with the publication of his remarks that the church had grown "obsessed" with abortion, gay marriage and contraception, and that he had chosen not to talk about those issues despite recriminations from critics."

On Gay Priests, Pope Francis Asks, 'Who Am I to Judge?'
http://www.nytimes.com/2013/07/30/wor...
"For generations, homosexuality has largely been a taboo topic for the Vatican, ignored altogether or treated as "an intrinsic moral evil," in the words of the previous pope."

Where Pope Francis Really Stands On Issues Like Abortion, Divorce, And Gay Marriage
http://www.huffingtonpost.com/entry/w...
"Pope Francis is expected to raise issues ranging from climate change to income inequality when he visits Cuba and the United States Sept. 19-27."

TestTube News is committed to answering the smart, inquisitive questions we have about life, society, politics and anything else happening in the news. It's a place where curiosity rules and together we'll get a clearer understanding of this crazy world we live in.