Why Does Everyone Love Pope Francis? 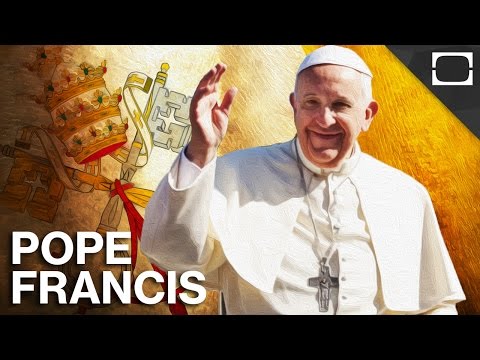 Subscribe! http://bitly.com/1iLOHml
Special Thanks to Chastity Vicencio for hosting TestTube!

Pope Francis has captivated the

world with his kindness and progressive ideals. What specific actions has he taken that make him so popular?

Pope Francis Declares Evolution and Big Ban Theory Are Real and God is Not 'A Magician With A Magic Wand'
http://www.independent.co.uk/news/wor...

Twiplomacy Study 2014
http://twiplomacy.com/blog/twiplomacy...
"World leaders vie for attention, connections and followers on Twitter, that's the latest finding of Burson-Marsteller's Twiplomacy study 2014, an annual global study looking at the use of Twitter by heads of state and government and ministers of foreign affairs."

Pope's Approval Rating at 85 Percent Among U.S. Catholics
http://polls.saintleo.edu/popes-appro...
"Pope Francis enjoys an 85 percent approval rating among American Catholics, and at 63 percent approval rating among all Americans, according to a new survey by the Saint Leo University Polling Institute. Just 5 percent of Catholics, and 8 percent of all Americans, hold a negative view of how Pope Francis is handling his duties as Pope."

Watch More:
Should Catholic Priests Be Able to Marry?
https://www.youtube.com/watch?v=kzNUP...

TestTube's new daily show is committed to answering the smart, inquisitive questions we have about life, society, politics and anything else happening in the news. It's a place where curiosity rules and together we'll get a clearer understanding of this crazy world we live in.